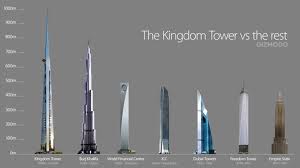 The proposed Kingdom Tower which when built is expected to become the world's tallest building has been okayed by Jeddah Mayoralty.

Jeddah Mayor Dr Hani Abu Ras announced that the mayoralty issued a license on Monday for constructing the tower in North Obhur. The Jeddah Economic Company has received the permit.

As per report, the 161 storey tower is projected to be completed in 63 months. Work on the project is expected to begin soon. The tower will be over 1000 meters in height and it will be the heart of the project located over an area of 5 million square meters.

Kingdom Holding Company had earlier announced its signing of a contract with Jeddah Economic Company and Saudi Binladin Group to carry out the tower project at a cost of SAR 4.6 billion.